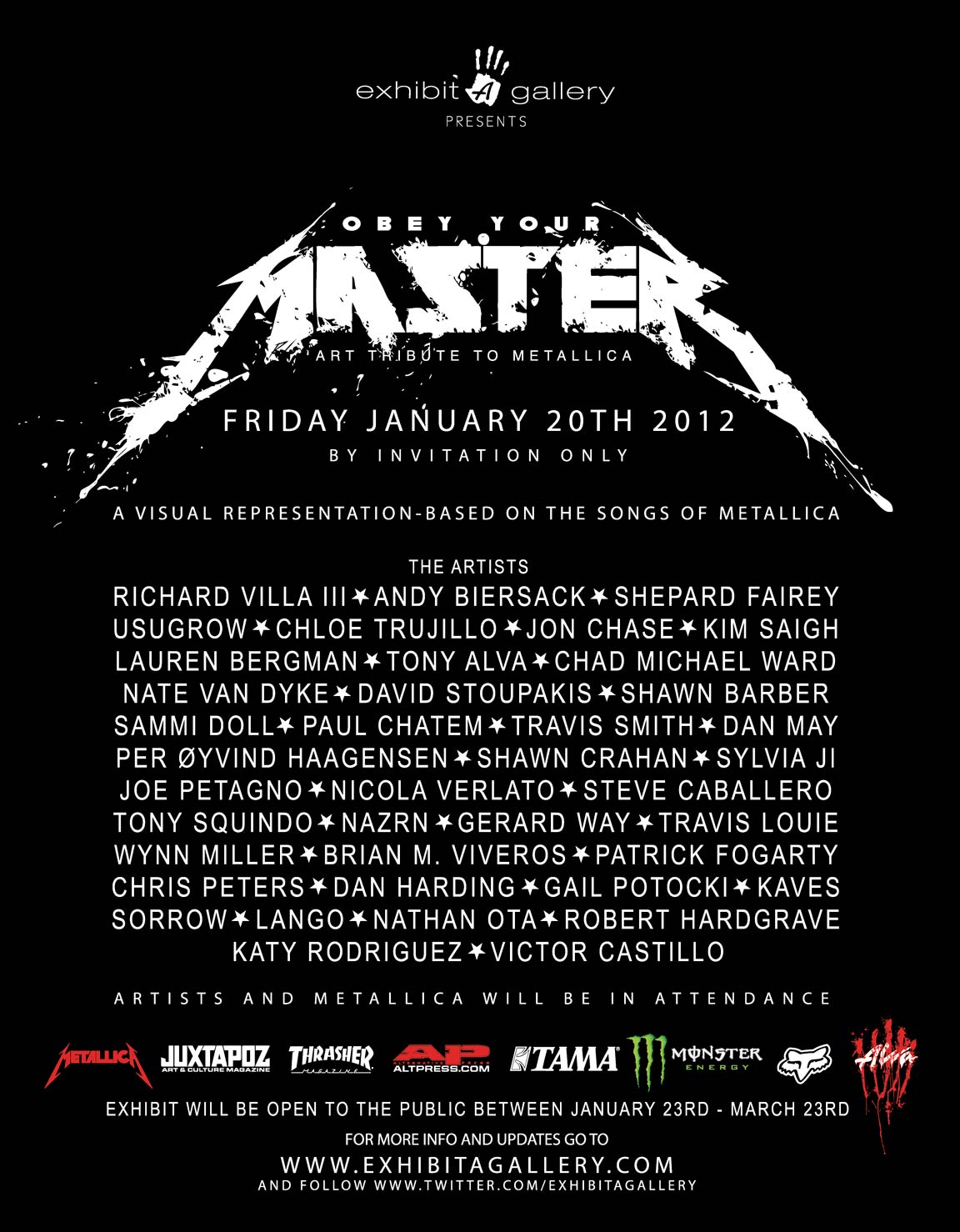 EXHIBIT TO BE UNVEILED ON JANUARY 20, 2012 IN LOS ANGELES

Los Angeles, CA – August 22, 2011 – Exhibit A Gallery founder / artist Richard Villa III and legendary skateboarder Tony Alva announced today the Obey Your Master art exhibit. Obey Your Master will feature a collection of artists from the worlds of Art, Fashion, Film, Music and Skateboarding coming together to pay tribute to Metallica.
For the exhibit, the artists have all chosen a song by the heroes of metal, and will execute their vision in their individual artistic mediums, based on their interpersonal relationship to Metallica’s lyrics and music. The final art pieces will represent each chosen song, and will be revealed on January 20th, 2012 at Exhibit A Gallery to a private reception, with all of the artists and Metallica in attendance. The pieces will be available for purchase starting that evening, through March 23, 2012.
Rock music has always inspired fans and creative types alike, empowering and influencing them personally, sonically and artistically. Some examples of the influence of Metallica’s music on artists are with Obey Giant’s renowned street artist Shepard Fairey and his politically driven propaganda art. One could make the connection between Fairey’s art and an album like Metallica’s …And Justice for All. Starting in the early 1980′s, iconic skateboarder, Steve Caballero during skate competitions would correlate his music with his aggressive skate style, he would insist to organizers to turn up the volume and blast songs off Metallica’s Kill Em’ All album. Contemporary Metal band Black Veil Brides’ 20 year old frontman Andy Biersack, grew up listening to Heavy Metal music. One of his most fond memories of early adolescence, was sitting in his living room with his childhood friend watching Metallica VHS tapes. They would thrash along, singing every lyric and banging their heads until their necks felt as if they had been in a car crash. He states “As I got older and began to write my own songs, the tone and style of James’ lyrics and singing became a huge influence to me. The use of religious and cult metaphors and tenacity with which he sang was something I aspired to, and to this day continue to be inspired by. Metallica to me is the quintessential Heavy Metal band. Equal parts darkness, intellect and vitriol”. These are just a few examples, but there have been millions more who have drawn influence from Metal music, specifically from Metallica. Many of these artists are from all walks of life, they are now leaving their own indelible marks on the world and are driven in part by the intellectual rebellious lyrics of Metallica. Most of these creative fans have never had the opportunity to do any art related to the band…
Until now!